Two-way street: The Paulista Avenue, flux and counter-flux of modernity | Hey, you! Smartypants! Think you got brains? 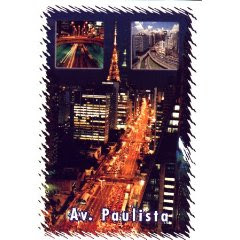 Today we have a book for people who have minds and like to use them. Does that sound like you?
Fantastic.
Ever stopped to admire some local architecture? Ever been captivated by the lines of buildings as you walked down the street? Ever gazed at the glass, steel, refracted and reflected light of a chain of high rises and pondered its semiotic value in understanding the flux and counter-flux of modern society within an unpredictable urban fabric?
You will after this book.
Two-Way Street, by Marta Vieira Bogéa, critically examines São Paulo's Paulista Avenue as a coded form communication, a network in which metropolitan space becomes message and discourse.
Followers of architecture, contemporary Brazilian theory or Latin American research in semiotics may already be aware of Bogéa and Dr. Samira Chalub of Pontifical Catholic University in São Paulo, who wrote the forward. If you're not, get hip with this book! You won't regret it.
Below is an excerpt from Dr. Chalub's introduction in Two-Way Street:
She [Bogéa] captures the sense of design of the visible space as an architect while also exposing the invisibility of ambiguous spaces: the sensorial-synthetic, the brilliance, the opacity, the paralyzed, the dynamism of nervous-muscular movement, entropic sounds, the whole spectrum of colors, tonalities, antiquities, modernities... an imaginary de-architectonics of the city's architecture. Poetic flaws in the symbolism of modern design.
A labyrinth of almost indescribable surprises imposes itself upon the rectangular and rectilinear surfaces projected by modern intentions between the use and the passage of "Baudelairean" man in the multitudes.
And that's just the forward! 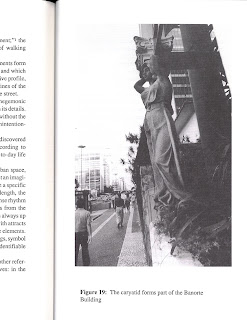 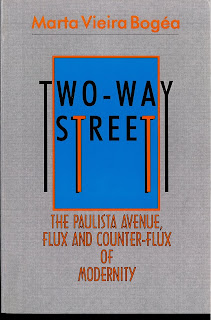 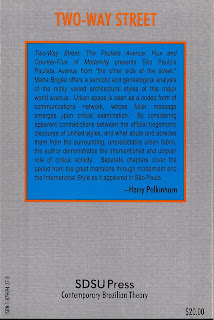