The Day of the Lord Cometh: Nicholas Genovese's The Utopian Vision: Seven Essays on the Quincentennial of Sir Thomas More from San Diego State University Press


Utopia has long had a bad rap.

Members of nearly all political persuasions are frequently denounced as “utopian” in espousing an unrealistic and unattainable vision. Ideas are routinely held up “utopian” in the sense of “good in theory, untenable in practice.” If you believe in x, you’re a “utopian.” Might as well leave such things to the realm of fiction. Most espousing one ideology or another would avoid calling themselves “utopian” for these very reasons.

The very word utopia doesn’t help matters. Coined by Thomas More in his likewise-named work of 1516, utopia literally means “no place”—οὐτοπία, or outopia, for Greek-savvy readers. Obviously More wanted his readers to understand from the get-go that his was an impossible project. And unfortunately for ideologians of the modern day, this coinage stuck.

But the idea of utopia hasn’t always been understood as an unattainable fantasy. From virtually the beginning of human civilization, people have traded ideas about the perfect society, and those perfect societies have always been understood as very real, whether an object of the past, present, or future. As SDSU’s own E.N. Genovese argues, two great traditions of utopia existed in antiquity. Those traditions may seem alien to us, but there are bound to be familiarities to the modern ear. What Genovese identifies as the “Indo-European” tradition is the idea that human civilization is cyclical, and that we of the modern day are (of course) in the worst possible existence, an “iron age” to be held in contempt to a past—and future—“golden age”, where justice reigns and humanity lives in an exalted state. The “Near Eastern” tradition, on the other hand, is the idea that a very real paradise currently does exist. This paradise usually takes the form of a garden, wherein there is no violence, no illness, and no suffering (paradise itself comes from a Persian word that means “a walled enclosure”). The Garden of Eden is the most obvious example of an ancient Near Eastern paradise, and as Genesis would have us believe, it does currently exist somewhere around Mesopotamia.

As Genovese argues, the Indo-European and Near Eastern traditions survive and combine in the form of that great global religion, Christianity. It upholds the example of sinless man in a past paradise, in the Garden of Eden, and it believes in a presently existent paradise, the Kingdom of God in the heavens—both inheritances from Judaism, a Near Eastern religion. And as Jews came to believe before the time of Jesus, so did Christians: a future golden age is to come, the reign of God on earth.

Two thousand years of interpretation have produced interesting takes on this utopian belief, and likewise lots of word soup. One mouthful possibly familiar to readers is Darbyite premillennialist dispensationalism, a modern interpretation of Jewish and Christian prophetic literature that features a “prophetic clock” operating throughout history. When God decides to start the now-frozen prophetic clock again, the earth will have seven years left before the return of Jesus with fire and brimstone. Fun events that will presage the end-times include a failed attack by Russia and Ethiopia on Israel and the installation of a single world government. Understandably, dispensationalists were excited when the modern nation-state of Israel and the United Nations were founded.

As the image shows, dispensationalism is quite complicated, but its appeal has not been dampened, particularly in the United States. Readers today can enjoy lots of dispensationalist literature, like the bestselling Left Behind series (all sixteen volumes of it) or even the widely panned Nicolas Cage movie of the same name (currently at a 1% "fresh" rating on Rotten Tomatoes).

My point through all this is that a lot of toil has been spent on getting utopia right. And while I don’t espouse dispensationalism or many other utopian projects myself, I only want to suggest that we redefine the word utopia to mean something simpler: a better place. While many in the West don’t believe in a cyclical view of history anymore, many often uphold the glory of past societies as examples for our modern decrepit society to aspire to—see how often “the Founding Fathers”, the “good old days”, the 1950s, and so on, are looked upon with sometimes-religious fervor. And while many likewise don’t believe in a literal paradise existent somewhere else in the world, we often glorify other societies for their supposedly superior ways of life—Japan or Scandinavia, for instance—or maybe even ourselves—we in the United States are supposedly members of a “city on a hill,” as Ronald Reagan once dramatically put it. The idea of the “noble savage” also comes to mind, that colonized indigenous peoples enjoyed or enjoy a simplistic and morally upright idyllic existence in nature.

In short, utopia is present nearly everywhere in modern discourse, but it doesn’t get recognized as such. Instead, it gets denigrated as a silly fantasy. To close, maybe we should understand utopia in an alternate reading: as eutopia, εὐτοπία—in other words, a good place, something we all hopefully aspire to.

(To read more on Genovese’s construction of ancient utopia, order SDSU Press’s very own The Utopian Vision: Seven Essays on the Quincentennial of Sir Thomas More, available on Amazon here. The book includes other essays on utopias throughout the centuries, such as utopias in Marxism, feminism, Russia, Comte, Vonnegut, and of course, More himself. It also contains the first-ever comprehensive annotated bibliography of utopia!) 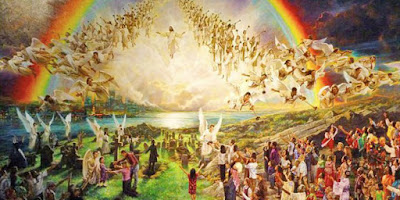 (Learn more about utopia with SDSU Press’s The Utopian Vision:
Seven Essays on the Quincentennial of Sir Thomas More, available here at Amazon!)
Posted by Brian Frastaci at 10:11 PM No comments: