Today is the day!

We invite you to a special conversation with Ms. Georgina Herrera, Cuban poet and writer for radio, television and film. Dr. Norma Iglesias will interview Ms. Herrera about her experiences prior to, during and after the Revolution and how race has been historically shaped and expressed over time. In addition, we have secured the renowned Cuban drum and dance group, Omo Ache, to perform after the talk. 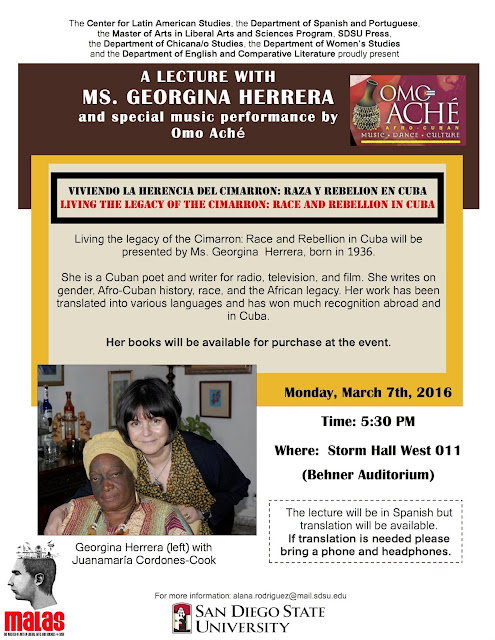 The event will take place in Spanish but we will provide simultaneous translation. Please bring a phone and headphones if you would like the translation service.

Her books will be available for sale at the event.

This is a very special occasion for us, and we hope you'll join in welcoming this wonderful guest from Cuba.

Border Angels: The Power of One

"How could it be possible that the wealthiest country in the history of the world allowed the very people who picked our food, took care of our children, and built our homes to live in canyons without shelter, running water, or electricity?" - Enrique Morones

Award winning author, activist, and director of the organization Border Angels, Enrique Morones, brings awareness of his experience in working with undocumented workers and travelers in their efforts to cross the United States/ Mexico Border in Border Angels: The Power of One. Morones has worked alongside fellow substantial and influential activists such as Roberto Martinez, Mar Cardenas, and Dolores Huerta to fight against corruption, such as police brutality and vandalism, within the Mexican community.

Border Angels swiftly navigates through Morones' experiences as an activist, beginning with a letter he received from Juana Navarro, a mother of a young man who died while attempting to cross the border into the United States. Her powerful letter expresses her deep sorrow at his death, representing the emotions and feelings of many other parents who have lost children while they set out to enter into a country for opportunities.

Morones raises questions about the personal and the political as he battles against politicians such as Arnold Schwarzenegger who was at a Chargers game while a fire threatened to kill Mexican migrants that were living in the San Diego hills. "They won't leave because law enforcement is working with the Border Patrol. They shouldn't have to worry about their immigration status right now, and the ones who are in their apartments are scared to leave them because you have checkpoints set up to check their IDs, and they don't have IDs because you won't pass the drivers license bill." This powerful conference and debate between the governor at the time and Morones questions the attention and support that is provided to Mexican migrants from the government. How long would it take for migrants from any country to enter and live in the United States when U.S. immigration laws have insufficient visas to meet the migration demand? What are the backlogs of available visas provided doing to families that have been separated for 20 years? And for how many deaths are these laws responsible for?

Border Angels not only asks these compelling questions, but demands an answer to them. However, the emphasis is not only focused on the negative experiences within the community of migrants, Morones also incorporates the positive outreach that he has done in the Latino community. For example, the San Diego Padres worked with Morones and successfully increased the Latino fans from 50,000 to 800,000 over a six year period. This event came at a time when the North American Free Trade Agreement (NAFTA) came into effect and negatively impacted agribusinesses for small famers in Mexico. This event was a substantial and joyous moment in Morones activism and had a positive effect in the Latino community.

Border Angels allows the reader to experience both the negative and positive events that occurred during his time as an activist to show the social justice that he has achieved on a community in a time when they desperately needed his bravery.
Posted by Unknown at 12:46 PM No comments: