The Unveiling of Humor Within Kafka's Tragic Mask: The Comic Trial of Joseph K.: Text and Context by Héctor Ortega and Edited by Manuel Flores (SDSU Press)

Picture this: a script, a series of analyses, a photographic and stylistic smorgasbord of theatrical visions, a graphic and illuminating glimpse into the tortured, jester-like mind of one of the greatest writers of our time: Franz Kafka. This is exactly what one should expect to find within Héctor Ortega's The Comic Trial of Joseph K.: Text and Context, which soars through literary circles as a triumph of adaptation and critical reflection combined in one text. Readers are, at first, presented with   Héctor Ortega's  "mexicanidad" vision of The Trial, which finds its roots in the humanity and soft-spoken comedy of its tragic characters as they transcend the pages of the beloved author's work. Then, following the play's original script, one is treated to several in-depth analyses of the (often neglected) comic visions within Kafka's works by such esteemed artists and critics as Héctor Ortega, Augusto Monterroso, Hugo Hiriart, Manuel Flores, and D. Emily Hicks. And, to top it all off, throughout the text are smatterings of original artwork by José Luis Cuevas as well as photographs of  Héctor Ortega's original stage production. Edited by Manuel Flores, The Comic Trial of Joseph K.: Text and Context is available now through SDSU Press!
Posted by Kevin Cullen at 11:06 PM No comments: 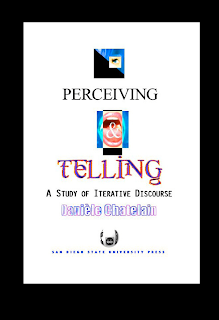 ver wonder what the trick is to writing a captivating narrative? The answer is repetition. Well actually, the answer is a bit more interesting than that. Danièle Chatelain's book, Perceiving and Telling: A Study of Iterative Discourse explores the dynamic of space and time within the art of iterative discourse. Chatelain develops the concept of repetition helping it grow from a boring and flat concept to one that houses the fluidity of perception. Chatelain says, "Perceiving, therefore, should be considered as a central element in the functioning of any narrative" (94). The tricky concepts that go into an excellent narrative are thoroughly dissected as she also studies the division between heterodiegetic and homodiegetic narratives. Writing a narrative can sometimes feel like an overwhelming task, but with Chatelain's insight on the matter (and of course with her glossary on hand) the job will be less daunting and instead become an exciting challenge.

Perceiving and Telling: A Study of Iterative Discourse is on sale via the SDSU Press.
Posted by Yarely Alejandre at 5:59 PM No comments: