The Comic Trial of Joseph K.:Text and Context... as staged by Hector Ortega

It is surprising: I have found that  more people than I realize enjoy the theater- personally I have never been one for it. I am sure that high school Shakespeare has convinced me as well.  But this is not to say that I have not matured or changed my opinion. Maybe I have not seen or read "the right one," so I start here.

After reading The Comic Trial of Joseph K.: Text and Context there are too many places to start. Everything from the introduction by Harry Polkinhorn to the last word of Emily Hicks essay astounds me. The title alone says it all. But despite its forwardness, the book does more for laughs and chair-clenching (un)satisfactions.

For us Lit-Heads, The Context surrounding this adaptation vivifies comedy, when explaining a joke usually ruins it. For example, Hector Ortega invites us in with his "Notes on the Stage Adaptation of Franz Kafka's The Trial" starting with:


Perhaps I've exaggerated in taking a [comic] side (Gogol says that a speech cannot be launched without exaggerating a little), but I'm sure I have exaggerated much less that Jean Louis Barrault and Andre Gide did, or even Orson Welles himself accentuating the tragic and pathetic side of the novel and eliminating any humorous dash that could compromise his gloomy conception and inspire a laugh.

Moments like this the author begins a dialogue with us, animating the work that  otherwise demands viewership. Though we could say that Hector Ortega intends to print his stage adaptation; because of a interweaving thread, that of fragmentation, or fractured identity. To further explain, Harry Polkinhorn admits in his introduction:


How can any art escape the straitjacket of identity... Kafka, the Polish Jew living in Prague and writing in German (instead of Yiddish), becomes a symbol for the most extreme of fractured identity politics characterizing our time... Yiddish, German, Spanish, and now English. Each translation betrays the original, again repeating the pure guilt and consequent sacrifice visited upon the individual.

If we take this fractured lens of identity further away from the stage, than we see the book as fractured. Because it does not have the stage or actors in front of us, but in our mind. Betraying all the aesthetics of theater, and possibly novels, but transcending a jelly boundary that exist between live actors and that of print.

So, this is where I find the comedy in Hector Ortega's stage adaptation- in these clashes and fractures. An irony that can break bodies of identity, but only from belly laughs. Still, comedy is very dangerous, and Hector Ortega works with meticulous pen to reveal an image and mirror. I can call it Mexicanidad, and I will. But I think we can get a little funky, and get indeterminate. Only for the sake of interpretation. So go ahead, its summer! Enjoy a laugh or two while staying cool with The Comic Trial of Joseph K. Text and Context.

Nailed to the Wound... Tales by Jose Manuel Di Bella 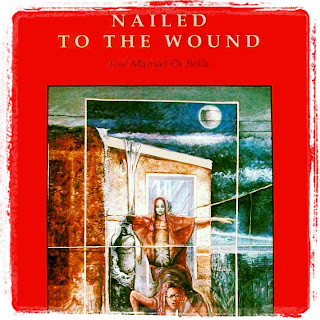 There are books, titles, works , and so on that deal with a "peculiar" literary technique that seems to have fallen into an awkward void. People seem to constantly put anything from William Faulkner to Joyce on their reading list, the title of which might read "'Summer books...' I need to read to seem more cultured, but won't understand," otherwise known as Stream-of-Conscious. And it is ok! I have authored such a list as well, and cannot begin to comment how many times I have to had re-read a page of The Sound and The Fury, at this point I should just re-read the whole book.

But by far the most moving piece I have encountered, and I recommend for anyone who wants to start maneuvering and breaking into a pair of new stream-of-consciousness reads is Carlos Fuentes "La Raya del Olvido" or "The Line of Oblivion," found in his novel of short stories La Frontera de Cristal or The Crystal Frontier. The reason why, its complexity veiled in simplicity. The language and sentence structures will not take a toll on many, but yet reveal a dramatic mentally savage end. It's also short, for those of us that say we have no time.
If yiu want to get a taste of Carlos Fuentes, this link will take you to a Dance performance video Arturo Fuentes did based off Carlos Fuentes "The Line of Oblivion." Go ahead and click on it and peer a little into the Crystal Frontier
http://www.youtube.com/watch?v=3pEWxjAES40

Somwhere on this path do I find myself with Jose Manuel Di Bella's Nailed to the Womb.

His sentence lines move with controlled swiftness and dissonance. For example, in his short story "The Card," which involves a translator, who takes the role of narrator, illustrates his last interactions with his lost  friend. This quote highlights their friendship and the beginning of the end..

I had thought to call Lucia to have her invite Magui, but soon this idea dissipated, too far away, on hearing the first thing he said: 'Time only exists for those who dare to measure it. I have no beginning or end.' and he cackled impressively. Used to his phrases, I also started to laugh and added somewhat uncertainly: 'If you hide a minute in a box, and then open it after 20 years the minute will still be there.' his response left me cold: 'yes, but you have to be very careful about hiding it. It can be the minute of your recapitulation.' And he again cackled, which now didn't last as long, and with that naturalness he asked me how the matter of the translations was going...

This should also provide a taste to Jose Manuel Di Bella's caliber by impressively creating vivid characters through not only the eyes of others but the characters own internal experiences in a few concentrated pages. Which perfectly portrays the power of a stream of conscious. This is as close as we can get into someone else's skin before losing ourselves.
Another example of Jose Manuel Di Bella's narrative power resonates in each character's boundary breaking voice tearing through the pages and our atmosphere. In the main titles story "Nailed to the Wound" the narrator begins:

Well I'll tell you. I don't worry too much. As long as you don't interfere with what I want to do, good luck and good-bye. It happens that suddenly you adopt high integrator flights of dispersed masses and want- really it's a reverend ingenuity- feel yourself the inspiration of something that transcends us...but the truth is that you have an authentic leader complex.

Each ending also brands a picture of longing. I would give you a quote to peak, but I think 1) that would ruin the ending 2) you need to find out by yourself 3) if I gave you any more passages I might end up showing you the whole book. And you need to read this. It is a beautiful mental piece without the surgical price or deathly scavenge.