What is "the Power of One?" THE POWER OF ONE: THE STORY OF THE BORDER ANGELS by Enrique Morones with Richard Griswold del Castillo | SDSU Press 2012 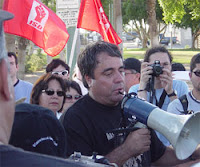 Ever been to a borderland? You know, that dry, volatile, and daunting space between Mexico and the United States. The stretch of miles that blurs both cultures into a hybrid of Mexican tradition and American customs. Well, activist Enrique Morones is on the front lines of this borderland fighting for a peaceful bridge between both worlds.

In 1986, Morones founded the non-profit organization, Border Angels which has saved thousands of immigrants from certain death while attempting to cross into the United States. Morones was born in San Diego, and with the help of thousands of volunteers he has become a presence of support for those struggling in this borderland. In The Power of One: The Story of the Border Angels's165 pages and with the help of Chicano historian, Richard Griswald del Castillo, Morones has been able to document his personal and public battles for social justice and for the protection of human rights. Mexican president Felipe Calderon personally awarded Morones in 2009 with Mexico's National Human Rights Award for his dedication and constant fight for justice. 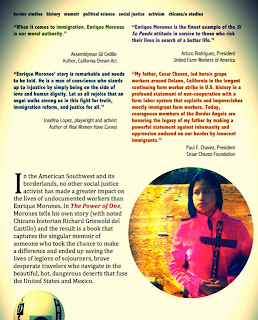 Enrique Morones is an educated and passionate activist that has profoundly changed the lives of people on both sides of the border. His deep loyalty to his Mexican and American roots have motivated him to work hard and inspire others. Morones believes that there is power within every individual and that even one person has the capacity to make a profound impact.

Purchase you copy of The Power of One: The Story of the Border Angels from the SDSU Press and learn about the borderland through the eyes of the person that saves it!!

The back cover of this new SDSU Press volume appears there to your left--click it to enlarge and read more about THE POWER OF ONE.

Posted by Yarely Alejandre at 3:43 PM No comments: