Vidas Fronterizas: Creative Non-Fiction from the U.S./Mexico Border... Somewhere Beyond the Border 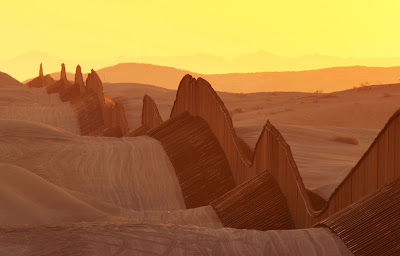 The border seems to have turned into the largest iron monster- transmuting everything from wealth, art, territory, people, and dust. Yet, it seems to exist in a fractured reality, and like broken bones or scars, the land receives a blow, healing in the makeshift slings of bureaucracy. The borderland, it receives a jailhouse sentence with graffiti walls for prison tattoos. And the only people feeling it are those who have itch-a-sketched, with barbwires, the borders of their bodies with the physical land of which they belong. In the mind: a hallucinogenic Polaroid imprints its experiences, souls, corpses, and the ultimate art of life into the slings of the conscience unconscious.

And so the definitive questions is posed, and it is not who am I? But, "where are you from?"

Vidas Fronteriza/Border Lives balances and rumbles the binary border of the U.S. and Mexico, excavating between the buried and alive, flirting with past ghost and patrols-finding, and always finding the genesis of when the definitive line was drawn. But, who's asking the questions around here... anyway.

Existential break-downs and mental-shakes frisk the definitions of each of these essays. From Harry Polkinhorn's introduction to the creative non-fiction essay genre to Ramon Mejia's Loteria-like visions, writing a death defying game of chance. As well as William Anthony Nericcio's Nietzschean deconstruction of border memories and the ever-persistent, pesky, little TRUTH. Or the Chorizo James Bradley dishes out. Even Emily Hicks wills a kaleidoscope collage of performance in ink and paper.


Essays like James Bradley transcend experiences from the page answering our enigmatic question:

"I am from the Border (i.e. ,Borderlands)". Or if I really wanted them to have something to think about, I'd say, "I was born in San Diego, like my mother and my mother's father, and raised in the foothills east of there along the Mexican Border." Not U.S. Border, or U.S.-Mexico Border, but the "Mexican Border, as if to emphasize the relationship with the "other" country, the proximity of the "foreign."

And it is this "foreign" nature that does not marginalize the indentations of these border text but give life to a fluid identity. These voices speaking not from a wound but a womb, the divide, Beyond the Border.
In Vidas Fronterizas

Posted by Unknown at 1:51 PM No comments: