Arguably the Best, Most Affordable Paperback Study of German Expressionism is Back in Print... 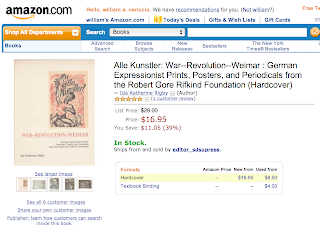 Hit the image here to your left for more info and a special offer from SDSU Press via Amazon.com
Posted by SDSU Press at 10:52 AM 1 comment: 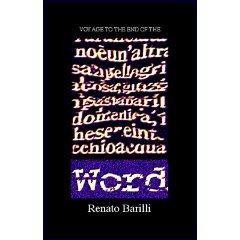 When Renato Barilli published his Voyage to the End of the Word in Italy in 1981, it was a huge success.

Now, this brilliant collection of poetry and criticism has been published in English, and is available only from the SDSU Press.

There's more to the book than the mini-anthology of fantastic work by poetic experimenters (though that's pretty awesome). In Voyage, Barilli places Italian experimental poetry in a new context. His criticism combines the linguistic theories of Ferdinand Saussure with the Freudian notions of pre-oedipal bliss. The essays delve deep, revealing the puns, visuality, neologisms and full range of devices that experimental poets utilized to expand the capabilities of expressive language.

If you understand Italian, you can check out Barilli below. I have no idea what he's saying, but you might enjoy it!

Raymond Federman didn’t buy into “the rules” of writing. Instead, he shredded them (something we’ve all wanted to do to our copies of The Little Brown Handbook and Strunk and White).

Born in Montague, France, this Columbia and UCLA graduate became the foremost expert on Samuel Beckett, founded a publishing company for the avant-garde, wrote criticism, translated, and of course, created incredible work. He eventually moved to San Diego, and many of our University faculty personally knew him. When he passed last October, it was a blow to all.

Federman’s novels and poems defy definition. He deconstructs them, rearranges them, hammers them into the page in the strangest of orders. His poetry, especially, is graphic—not just descriptive, but deliberately placed on the page to form images and patterns, giving the entire piece an added layer of meaning. His wrote about everything, from the impossibility of putting the human debacle down on paper to a potato (it turns into a tomato).

Federman A to X-X-X-X: A Recyclopedic Narrative, covers everything about Federman—and it does so in the same freely chaotic spirit. A joint project of Larry McCaffrey, Thomas Hartl and Douge Rice, this must-have is currently available in a special, autographed, hardcover edition.

One of the few remaining copies can be yours for $34.95 (postage and handling included). Interested? Of course you are, but unlike the paperback version, these collector editions are not available online. To order, make out a check to SDSU Press (for $34.95) and send it to: 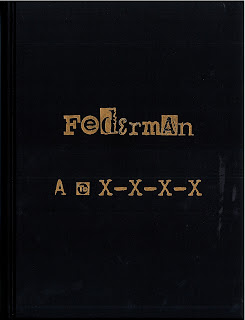 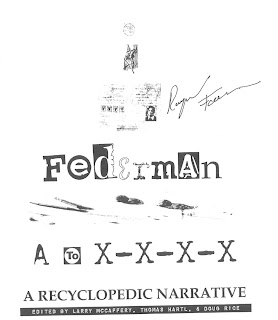 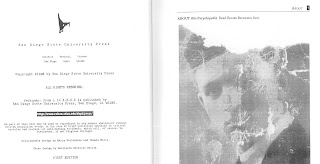 Posted by Harrison at 2:54 PM No comments: