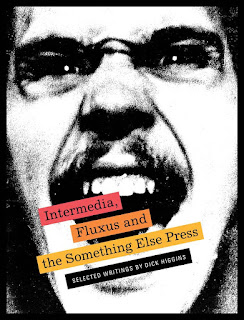 Siglio Press has released a wonderful paperback entitled Intermedia, Fluxus and the Something Else Press: Selected Writings by Dick Higgins. We were fortunate enough to receive a copy and it’s killer. This is a must have for all those privy to the radically far-sweeping yet methodically concentrated writings generated in and around the Fluxus movement of the middle part of the 20th century. 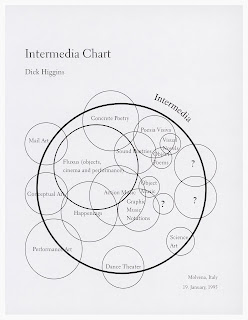 To recap: Fluxus is what happens if you do your best to put a softly dotted conceptual line around everything happening throughout aural and performative art in the 20th century — and if you happen to consider painting a performance — and if art might also be an arbitrary gathering of painters intending to paint for an hour and then, afterwards, burn everything thus produced in a brazier… Okay, honestly, defining Fluxus is a bit more than we’re going to do in a single blog post. 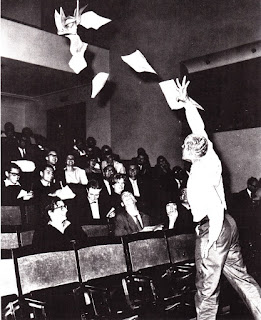 Oh, and don’t forget Something Else Press, the brainchild of Dick Higgins. Being a forerunner in the many-hyphenated identity, Higgins, the composer, poet, printmaker, artist, and a co-founder of Fluxus, managed to publish a fascinating assemblage of theoretical, historical, philosophical and plain artful texts by authors like Gertrude Stein and William Brisbane Dick and Ray Johnson. These publications, along with a plethora of detailed photographs, are featured in the aforementioned Siglio Press title. Of note: Intermedia, Fluxus and the Something Else Press also includes a quirky list of not-quite-actualized projects. We found one incredibly poignant, the collected writings of Erik Satie, fecund mind of the Surrealist and Dadaist movements, as well as ever-so-hip-even-in-2018 minimalist composer. 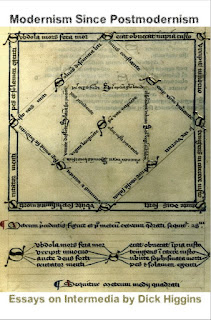 Speaking of avant-garde composers who also write, we should humbly mention that SDSU Press released a collection of essays by Dick Higgins. We would encourage any John Cage fans to grab a copy of Modernism Since Postmodernism: Essays on Intermedia by Dick Higgins if only for Higgins’ brilliant contemplation on the work of this minimalist composer and tenacious art theorist. If you ever find yourself having one of those irksome days, the kind where you question: is there something inescapably wrong about being a westerner? … then fear not. John Cage investigated such quandaries by creating music seeking to negate the implied “creator” that is omnipresent in all Western fabrications, be they theoretical, practical, conceptual, or actual… Spoiler alert: Cage achieved this by employing chance and probability in his compositions. But this phenomenon might go unperceived if not for the cogent work of the scholar Dick Higgins. Wait, it would seem that Higgins could add one more hyphenated word to his list of identities… so it goes. Here. Some Erik Satie. For while we're all feeling so wonderfully un-accomplished...

Posted by Live Faust Die Jung at 6:06 PM No comments: