The Ghost (?) of Tom Joad: Rage Against the Machine, John Steinbeck and More...

In the discussion recounted in Homer from Salinas: John Steinbeck’s Enduring Voice for California, William Deverell tracks the influence of art during John Steinbeck’s era and comments on its incredible impact on American politics of the 1930s. Artistic legends like Steinbeck, Woody Guthrie, and Dorothea Lange were called to the front lines of the political arena, acting as surveyors and documentarians of the economic realities of the Great Depression.

Art as political protest? What a concept. Let’s fast-forward 70 years to “The Ghost of Tom Joad” resurrected by Rage Against The Machine. {a live video performance appears below}

Republican National Convention 2008: Artists Silenced by Police. The news media, however, failed to use the word “artist” to describe the enraged rioters prepared to rock the RNC. After police cut the electricity to prevent RATM from taking the stage, lead singer Zack de la Rocha proclaimed, “the reality is, we are just four musicians from Los Angeles who have used our voices, and our talent, and our musicianship, and our words to stand up against these unjust policies and why the f*** are these cops so afraid of us?!” What do you do when the cops cut your PA system? You sing a cappella, of course!

Although RATM represents an extreme example of subversive artistry, this street exhibition reflects the political system’s indifference to modern creators and their unwillingness to acknowledge to notable artistic figures. De la Rocha asks, “why are they afraid of us?” and rightly so. In Deverell’s panel discussion, he argues, “In the 1930s, as people were trying to figure it out and legislatively address economic strife through the New Deal, artists were often brought in as experts, documentary experts on what’s happening and part of the political debate” (39). 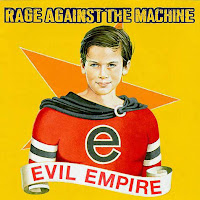 Akin to today’s economic struggles, legislators attempt to uncover the root of the country’s problems, but discount the ideas presented by mainstream musicians. Artists today are certainly not considered cultural, social and political “experts” of yesteryear. Here, the “ghost” of Tom Joad is less about the façade of the “promised land” (as presented in Bruce Springsteen’s original) and more about the ignorance of modern art in today’s political game.

As Deverell claims, art of today is not considered a part of the “political base” (40) because it truly does not matter to those in power. Is it the overwhelming amount of new artists? Has the political value of art diminished?