A Dick Higgins classic from SDSU Press: MODERNISM SINCE POSTMODERNISM ... 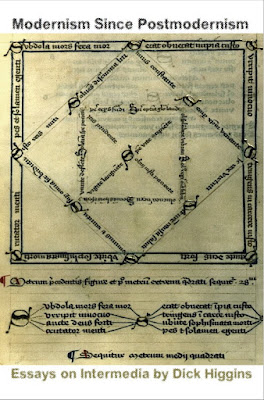 Modernism Since Postmodernism: Essays on Intermedia completed Dick Higgins' critical trilogy that began with A Dialectic of Centuries: Notes Towards a Theory of the New Arts and continued with his Horizons: The Poetics and Theory of Intermedia. A fluxperson, artist, poet, composer, and scholar of intermedia, Higgins also authored Pattern Poetry: Guide to an Unknown Literature, among numerous other works. He died in October of 1998.

Dick Higgins, from the Foreword to Modernism Since Postmodernism:

"Of course kitsch can be fun. Already 125 years ago, Rimbaud recognized this when, in the second section of A Season in Hell, he speaks of liking dumb paintings, door panels, stage sets, backdrops for acrobats, street signs, old-time literature and such-like. Who doesn't?... 'Kitschspeak' is the term I use...for the fashionable kitsch language about the arts, sometimes delightful for a while, as with 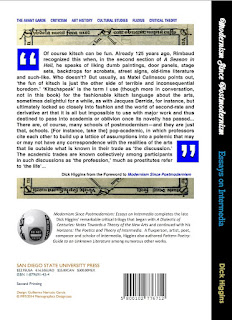 Derrida, for instance, but ultimately locked so closely into fashion and the world of second-rate, derivative art that it is all but impossible to use with major work and thus destined to pass into academia or oblivion once its novelty has passed... There are, of course, many schools of postmodernism--and they are just that, schools--but for a preliminary discussion there is no need to identify all of them. [One sort is] pop-academic, in which the professors cite each other to build up a lattice of assumptions into a polemic that may or may not have any correspondence with the realities of the arts that lie outside what is known in their trade as 'the discussion.' The academic trades are known collectively among participants in such discussions as 'the profession,' much as prostitutes refer to 'the life.'"

Posted by William A. Nericcio at 2:01 PM No comments: