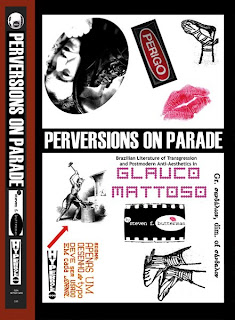 This is the first book-length scholarly treatment in English of the Brazilian poet Glauco Mattoso's work, some of which was written during Brazil's most recent dictatorship (1964-85). The author highlights Mattoso's themes of homosexuality, fetishism, and symbolic sadomasochism within a context of a comparative examination of transgressive literature in the Western canon (for example, the French poete maudit, such as Rimbaud, Baudelaire, and Verlaine) with particular emphasis on Luso-Brazilian literature from the Middle Ages to the present. Steven F. Butterman's PERVERSIONS ON PARADE, a respected 2005 issue from Hyperbole Books, an imprint of San Diego State University Press, has recently been featured in the University of Miami newspaper, The Hurricane; click here for the original story.

Perversions on Parade is a 2005 Hyperbole Books Volume. Christened in 2004 as an imprint of San Diego State University Press, Hyperbole Books is dedicated to publishing cutting-edge, over-the-top experiments in critical theory, literary criticism and graphic narrative. Imagine some odd, bastard child of SEMIOTEXT[e], Taschen, and Fantagraphics Books raised in the dumpster behind Powells, and you begin to wide the wave of Hyperbole Books. Remember, "Buy the Hype." 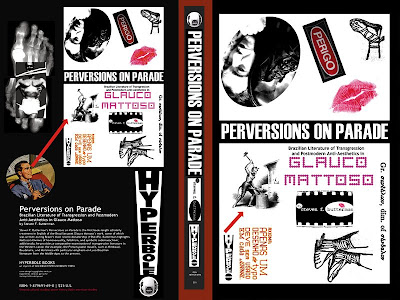 Posted by SDSU Press at 7:34 PM No comments: 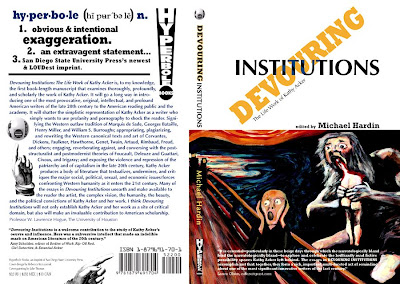 In April 1996, I organized a conference at which Kathy Acker was the keynote speaker,1 but could not imagine how to introduce such a complex writer and artist, and so I delegated that responsibility; now, however, I do not have such a luxury. I had met Kathy before, but it was while she was at this conference that she received the news that her biopsy had come back positive for breast cancer. Thus, when I heard on Monday, December 1, 1997 that she had died the day before, I felt a great loss. I was shocked-I knew she was a fighter and if anyone could beat cancer, she could-but at the same time, I had not heard from her since August. A few days later, I was informed of the news by the executor of her estate, so I asked how Kathy would have wanted to be remembered, thinking a memorial event in Houston might be nice, but he said, "keep her work alive." That was the germination for this collection, and I can happily state that since then, most of her work has come back into print, Grove released two new collections in fall 2002-The Essential Acker: The Selected Writings of Kathy Acker and Rip-off Red, Girl Detective and The Burning Bombing of America-and NYU sponsored a conference on Kathy Acker in November, 2002. However, there remains a dearth of critical articles and books on her work, and her fiction is not taught as often as one might expect, given its relevance to contemporary literature and theory. To that end, Devouring Institutions is meant to be an introduction to Kathy Acker, with its essays being merely thirteen ways of looking at one of the most innovative, controversial, and difficult of American writers...

It is essential--particularly in these beige days through which the narratologically bland lead the narratologically bland--to explore and celebrate the brilliantly mad fictive possibility spaces Kathy Acker left behind. The essays in Devouring Institutions accomplish just that: together, they form a rich, important, multifaceted act of reminding about one of the most significant innovative writers of the last century.

Lance Olsen
Devouring Institutions is a welcome contribution to the study of Kathy Acker's oeuvre and influence. Hers was a subversive intellect that made an indelible mark on American literature of the 20th century.

Amy Scholder,
editor of Bodies of Work, Rip-Off Red, Girl Detective, and Essential Acker
Devouring Institutions: The Life Work of Kathy Acker is, to my knowledge, the first book-length manuscript that examines thoroughly, profoundly, and scholarly the Work of Kathy Acker. It will go a long way in introducing one of the most provocative, original, intellectual, and profound American writers of the late 20th century to the American reading public and the Academy. It will shatter the simplistic representation of Kathy Acker as a writer who simply wants to use profanity and pornography to shock the reader. Signifying the Western outlaw tradition of Marquis de Sade, Georges Bataille, Henry Miller, and William S. Burroughs; appropriating, plagiarizing, and rewriting the Western, canonical texts and art of Cervantes, Dickens, Faulkner, Hawthorne, Genet, Twain, Artaud, Rimbaud, Freud, and others; engaging, reverberating against, and conversing with the poststructuralist and postmodernist theories of Foucault, Deleuze and Guattari, Cixous, and Irigaray; and exposing the violence and repression of the patriarchy and of capitalism in the late 20th century; Kathy Acker produces a body of literature that textualizes, undermines, and critiques the major social, political, sexual, and economic issues/forces confronting Western humanity as it enters the 21th century. Many of the essays in Devouring Institutions unearth and make available to the reader the artistry, the complex vision, the humanity, the beauty, and the political convictions of Kathy Acker and her Work. I think Devouring Institutions will not only establish Kathy Acker and her Work as a site of critical domain, but also will make an invaluable contribution to American scholarship.

A welcome and necessary addition to the Acker canon.

Writing between Madness and Paralysis

Building the Body of Desires


"Re-Educating the Body: Kathy Acker, Georges Bataille, and the Postmodern Body in My Mother: Demonology."

"Too Much Is Never Enough: A Kaleidoscopic Approach to the Work of Kathy Acker."

"The Lay of the Land: Piracy and the Iterant Body in Kathy Acker's Pussy, King of the Pirates."

"Between Theory and Autobiography: Negotiating Desire, Sex, and Love in the Work of Kathy Acker."

"Residues or Revolutions of the Language of Acker and Artaud."

"Kathy Acker's Radical Performance Writing in Eurydice in the Underworld and Other Texts."

"Beyond Appropriation: Pussy, King of the Pirates and a Feminist Critique of Intellectual Property."

"Scavenging the E-Wreck: Kathy Acker, the Internet, and Artis Electronica."

Posted by SDSU Press at 8:12 PM No comments: