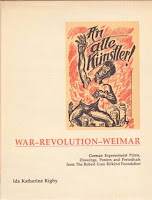 What better time to dive into the psycho-social dilemma of an era of art that embodies the tragic longing for justice and revolution than now? In Ida Katherine Rigby's War-Revolution-Weimer: German Expressionist Prints, Drawings, Posters and Periodicals from The Robert Gore Rifkind Foundation, the author and former San Diego State University professor of Art History outlines one of the art world's most important and influential movements--not only in the sense of aesthetic style, but also (and more importantly) in the sense of a political uprising in the aftermath of the most globally devastating war in the history of mankind.


The selected works within War-Revolution-Weimer, generously provided by the Robert Gore Rifkind Foundation based in Los Angeles, California, were created by German Expressionist artists, both well-known and obscure, between 1918 and 1925. Through a variety of printmaking techniques including woodcut, drypoint, lithography, etching, aquatint and even illustrations in crayon, these artists utilized a combination of aesthetic appeal and mass production to engage their audience into a sociopolitical dialog revolving around the fallout from WWI. As an idealistic language of revolution began to take shape following what German Expressionists viewed as the absurdity of war (i.e. death, killing and political injustice), art became a tool to express, simultaneously, one's emotive/physical reaction to war as well as ideas of political revolution.

Along with over one hundred image panels, Ida Katherine Rigby curates an equally vivid written historical context to the German Expressionist movement:


“These new radicals were convinced that their powerful reactions to the compelling times and their radical political sentiments could only be conveyed in an intensely emotionalized, revolutionary idiom, and they readily marshaled the prewar generation’s avant-garde, abstract style to serve a new, more political content. Theirs was often less Expressionism than that of their mentors; instead they merged Dadaist, Futurist and Expressionist elements into an explosive unity.”


The works compiled in War-Revolution-Weimer, indeed, embody political and social sentiments that are not entirely unlike our contemporary experience. Thus, immersing oneself into the world of German Expressionist art as presented in this book is guaranteed to shed new light on shared human experiences, both new and old.

Posted by Stewart Parker at 10:16 AM No comments: