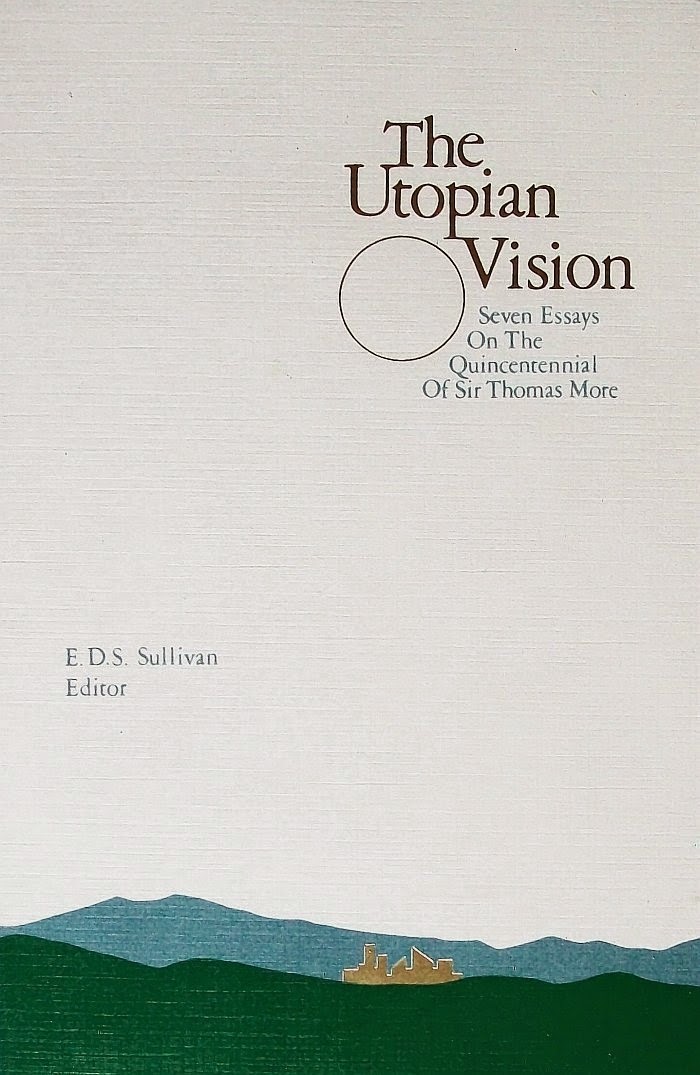 Thomas More is best known for his influential writing Utopia a novel that at the time dealt with the trouble’s of England and while these troubles, over 500 years past, are still asked about society by writers of the 21st Century.

The Utopian Vision consists of seven essays that denote the ideas of utopian thought, ranging from the concept of the “heavenly garden” to contemporary writing and analysis of utopian dystopian ideology. Each essay chronologically and identifiably makes a point for the reader to expound upon by his/her further thought or investigation. The Utopian Vision is a part of a series titled The Chautauqua Series which:

[I]ntends to provide the intelligent, educated layperson with stimulating reading on enduring aspects of thought and culture. The books in this series are not necessarily to break new ground in research or to provide complete summaries of issues but rather to stimulate further thought and investigation

An excerpt from each essay with commentary

“Beginning with this undocumented but not improbable event, I propose to trace a confluence of traditions of the first, eternal, and ultimate utopia— paradise” (10).

Genovese’s essay reads with ease, interest and explores the “old” idea of what utopia was. The reading is actually much more story like than an academic essay, cleverly weaving in quotes that make his case. We are given a “storyteller” as our narrative which is a touch that makes reading this essay enjoyable.

2. Place in No Place: Examples of the Ordered Society in Literature
E.D.S Sullivan

[W]hether humanism, neoclassicism, romanticism, or twentieth-century materialism— all the utopian examples of society’s aspirations for what could or should be are predicted on a concept of order which derives from function: the performance of certain work; the knowing and doing of one’s job (30).

Sullivan explores the similarities and differences throughout the utopian ideology. Its fundamentalism is called into check and Sullivan goes on to explore relations but let’s off enough for the reader to have their own thoughts. While this essay is informative it gives new ideas and exemplary texts for the reader to follow up on.

“The utopia I would like to discuss is often referred to as the American Dream, but this American Dream of an anti-human, self-defeating, ecologically impossible utopia which is fast becoming a nightmare” (51).

Hardesty’s essay takes a drastic tone change and a harsher realistic approach. Examining the very confines of our “American Dreams” and while I will not give away how he achieves this in his persuasive essay I will say that this essay was rupturing when reading.

Bartholomew uses this epigraph in the opening of his essay it foreshadows well what is to be discussed in his essay, Christianity and as the titled suggests The Russian Utopia.

“Comtian positivism is a conglomerate of philosophical views about ethics, religion and society united by a well defined vision of science and a faith in its power to change human affairs for the better” (93).

Marti divulges into the world of positivism where he discusses structure of society under its influence, their efforts to carry out and reasoning for some of its failures. This essay is weighted by philosophy, its abstract thinking gives the reader a chance to deeply think and analyze society as a whole in the view of positivism.

“The quest for utopia (and the difficulty in achieving it) has been as important for nineteenth and twentieth century feminists as it has been for other political and social critics and revolutionaries” (114).

Huckle looks deeply into the roots of feminism with her paper. Taking a close look at nineteenth century and twentieth century writings, feminist movements in literature such as Charlotte Perkins Gilman, Mary Grifftih and the utopia’s that are created. She looks at the evolution of a woman’s role within a commune, their ability to do equal work not based on gender. Just as More in his novel had women and men tending to fields we see a breakdown of gender where sex no longer has a defining place.

Before we look more closely at the opinions [Vonnegut] was now offering on the public occasions, and the two novels which have since issued from the presumably “new Vonnegut,” it will be useful to take a swift backward view onto the utopian themes already present in his first seven novels (139)

Martinez describes to us in a chronological fashion the writing and utopian themes described in Vonnegut’s writing. Slaughterhouse Five being of large focus in his essay Martinez does well to underline the utopian/dystopian dream and reality. 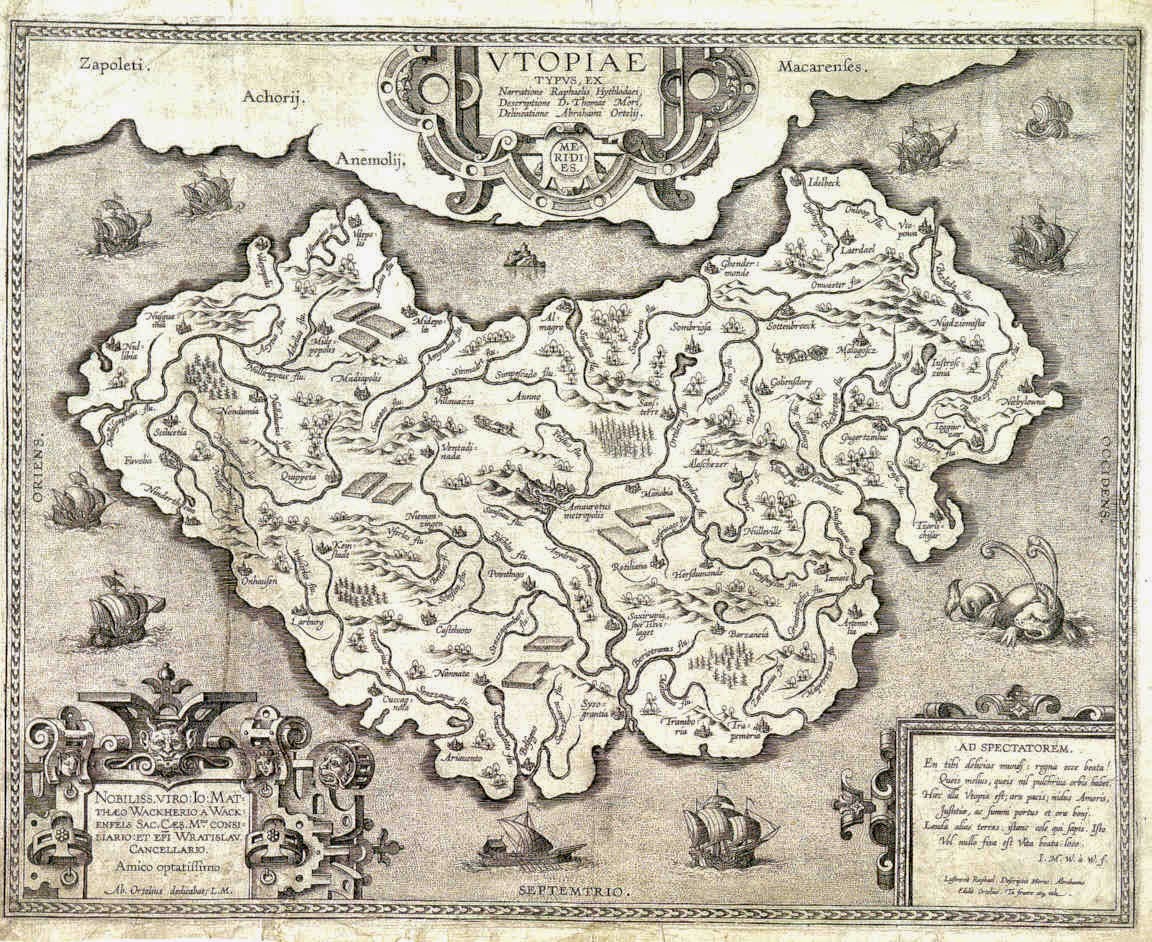 Each essay (based on lectures given at San Diego State University) completes the task that the compilation was set out to do, to create and invoke thought, to excite the reader to explore further into the realms of just what a utopia/dystopia society is, its rationality, its place and evolution in our society. Ranging from religion, philosophical, feminist, Marxist and fundamentalist perspectives it gives us as the reader a wide range of thought in very few pages.

If you’re of a curious mind and any of the quotes stimulated your mind to find out further follow this link to purchase. There can be no change without thought and this book begs for intellectual minds to ponder deeply upon.
Posted by Unknown at 5:37 PM No comments: