An Interview with Fanny Daubigny, Author of the New Book from SDSU Press, "Proust in Black" 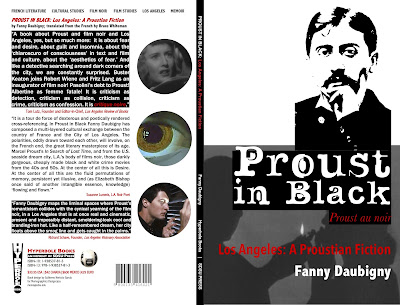 Fanny Daubigny has called Los Angeles, CA home for now over ten years. In her new book, Proust in Black, published this Spring by SDSU Press, Daubigny makes the case that, despite his death just after WWI, the literary essence of Marcel Proust is alive and well in the City of Angels; hiding within its many dark recesses that spurred the Film Noir genre in the mid-twentieth century. Proust in Black stands as an unprecedented merge of poetic verse, cinematic history and critical theory that reads not so much like an academic text, but rather, as Daubigny puts it, a "love letter" to the cultural elements that she for so long has poured herself into.

Fanny Daubigny lives and writes in Los Angeles, California, and works as a full professor in the Department of Modern Languages and Literature at California State University, Fullerton. This interview was conducted in February of 2019.


SDSU PRESS: You’ve written in the LA Book Review, in the context of Marcel Proust’s own critics attempting to investigate his personal life in order to better understand his work, “Reality always falls short, and objects of beauty become distorted.” How much of yourself was wrapped up in Proust’s fiction while writing this book? Was there something that you used to ground yourself in reality during the process?

Daubigny: Proust in Black is a love letter to the city of Los Angeles, the city that welcomed me more than 10 years ago both as an immigrant and a transplant from Miami, Florida. It is a love letter to literature and film and a farewell letter to a certain type of academic discourse, cultural and literary criticism that I often find too arid, insular and dry. Finally, it is an open break-up letter to a past love.

P: Because you also write poetry, Proust in Black strikes a beautiful balance between academic investigation and pros that often come across as a work of art themselves, which makes for a delightful and informative read. How did you go about finding this balance between personal expression and research-based writing?

D: The balance came to me very naturally and spontaneously. This is how I approach the world and this is how I write as a reflection of how I experience reality.  A balance that constantly swings its pendulum between chaos and order, reason and heart, intellect and emotions, all together pulled by Dionysian and Apollonian forces (as a reference to Nietzschean aesthetics).

P: Having lived all over the world--France, Canada, Chile and Los Angeles (perhaps I’m missing one or two?)--is there something about LA that lends itself especially to the Noir genre that isn’t found anywhere else?

D: Yes, I think it does although the genre goes well beyond historic and cultural determinations as I tried to show it in my essay. What makes Los Angeles so special to me in my exploration of the theme and the genre is the  explosive crystallization of various elements that are so intrinsic to the city: The historic with the second world war ‘free play zone’, the cold war freeze, the nuclear threat (nuclear tests operated in the desert of Nevada in 1953 radiated unto the city of Los Angeles); the geographic with the ever dramatic struggle of a city with its threatening landscape: the sense of a city always being ‘on the edge’ (on the fault line), at the very border of explosion (Kiss me Deadly (1955); collusion with Mexico (Out of the Past (1947); Touch of Evil (1958); at the border of death with the proximity of the desert (Sullivans’ travels, 1941) etc.

P: Your book spans decades of Film Noir in LA, from the 1920s to the 1980s. How, in your opinion, have LA Noir films changed throughout time? Do you think the tone of the LA Noir film has changed with the city, or do films change the way we see the city?

D: Yes, absolutely, I think they have even as the stereotypes belonging to the genre can be exported to other film genres. Let’s take the example of Marlowe, the stereotype of the detective.  Marlowe as seen in The Big Sleep by Howard Hawks and Marlowe as portrayed by Robert Altman in A Very Long Goodbye are two different characters and the refection of two different cities in transition. Marlowe in Altman’s movie is still on his quest for truth but the crime scene has shifted to Mexico, the bad guys have turned from librarians to hopeless middle-aged writers, psychiatric wards keep the city’s secrets and Marlowe’s greatest passion is now for a cat.

P: Proust in Black often blurs the line between reality and fiction in its embrace of the night--as you write, “In calling up the night, it is often the myths and folklore of childhood that are evoked,” and “...throughout the centuries the blackness of night has known how to share intimate space with the writer’s white page.” Is there something to the idea of letting oneself get wrapped up in the drama and fantasy of film and fiction in a city like Los Angeles? Do you think there is something that Film Noir--and for that matter, Proust, himself--can teach us about embracing the night?

D: Los Angeles has the texture of a dream-like reality. Never completely real, never completely fake. Always on the edge, on the fault line, in-between, and in-and-out. Film noir has the color of the night, where opposites contrast, collide, meet and merge with one another; where black and white evoke the night of dreamers (like Marlowe) and killers all alike. Proust’s novel, Remembrance of Things Past, contain early drafts that looked very much like a ‘bedtime story’, a conversation initially started between the narrator and his mother about literature. Later, the final version turned out to be the story of a man that cannot find sleep, dreams and wakes-up, fantasying all together about femme fatales, corrupted men and crimes (symbolic) all reflecting the progressive disparition and dissipation of a certain myth, the myth of a greater France, nostalgic of its glorious past whose dream was brutally interrupted in 1914, at the onset of one of the most vicious and barbaric times of the history of the French Republic when France, Europe and the world turned into the blackness and bleakness of WWI.

P: It’s undeniable that our world is changing more quickly by the day, with the advent of  social media, our addiction to the news cycle (and the news cycle’s reliance on our addiction), political turmoil, etc. Where does Proust’s work fit into all of this? Is there a remedy within his writing that society can find solace within? Likewise, where does your book fit into our society today? What can we learn from reading about the relationship between Film Noir and Marcel Proust’s work in your book?

D: Proust’s political stance is oven overlooked (or overshadowed) by the complex aesthetics the novel famously (or infamously) stands for. As said earlier, Proust’s novel is as much a work about poetry, fine imagery and complex metaphors as it is about history involving the researching, chronicling archiving and rendering of complex cultural, political and socio-economic questions such as: secularism, cultural diversity, class struggles, xenophobia, education, sexual politics, genre etc…
Proust in Black follows the path inaugurated by Proust’s novel in the sense that it strives to strike a balance between poetry and history, and in the end addressing in its content and in its form the primary question: how being bicultural is not just a historic but also a poetic question; how bi-culturality blurs the lines between forms and identities, genres and cultures.