Beyond the Graying of America: Who Cares? | E. Percil Stanford

Want to live forever?  Tough!  It's impossible (unless you have some mad scientist friends, of course).  If you're really worried about it, take a peek at SDSU Press' Beyond the Graying of America: Who Cares?  This publication is a chronicle of SDSU's Albert W. Johnson University Research Lecture Series in which Dr. Stanford presents and explains two major ideas that have changed the study of gerontology is America: the cultural equity and ethics of aging in the population and the significant role aging Americans have in our society. 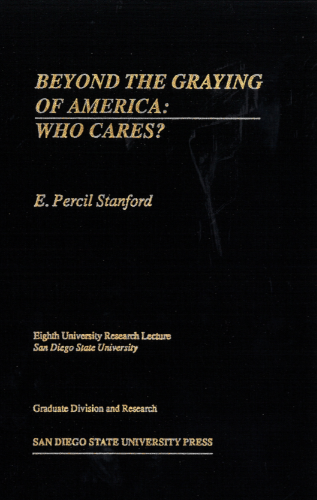 Stanford elaborates on how growing old is, indeed, a “serious social, economic, and sometimes political issue,” for he estimates that by 2030, that the 85+ age bracket will represent one in every eleven older persons (26).  This, of course, is diversified b the many ethnic groups that make up the United States.  Within these diverse groups, however, are four similar concerns: “1. the lack of adequate income; 2. health; 3. high energy costs; 4. housing, 5. transportation; and 6. social support systems” (27).  Stanford continues by stating that with these worries are predominantly popular within immigrant populations, and that these immigrants will create a change within the profile of San Diego’s aged population and the overall population of the city.  He believes that the Baby Boomers are also contributing to this; “as the median age of the population increases, life expectancies, falling fertility rates, substantial in-migration of employment in aging persons, and a large number of retirement-related migrants add to the reasons the median age is apt to rise beyond the age of 30” (28).  Life styles and government programs must change to meet these social changes – consequences of the aged population will not wait.
In the second half of the lecture, Stanford describes the aged population’s significant role in American society, that the aged are not and should not be seen as a burden, for
“the future, as we know it, will have its foundation laid by the elderly.  Their wisdom, insights, and dedication to preserving our society will have been the foundation on which our future lies.  We would be extremely uninformed to assume that the elderly would not be an essential element in framing our future.  It is the elderly moreso than anyone who can begin to anticipate the nature of things to come.”
The “era of the aged” is upon us – graying is a sign of maturity, not of decay (45).  See?  Nothing to worry about.  Aging is something to expect and rejoice about.  When you are 85 years old, you will provide the future with everything they need to know about how to succeed.  How could that bring you down???
Since E. Percil Stanford’s lecture, “he has served as the Regional Director for the West Region for AARP since 2002 and as the interim director of the National AARP State Affairs Department working on state advocacy issues.  Dr. Stanford was given the title of Chief Diversity Officer for AARP in December 2005.” He has been a pioneer for gerontology and of the aged population.  Bravo!
Posted by Anonymous at 2:18 PM