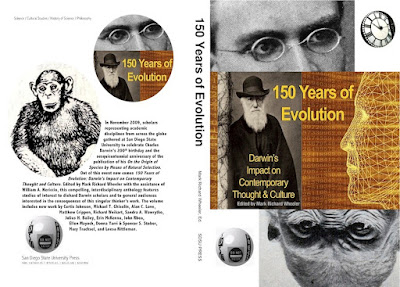 In the century and a half since he published On the Origin of Species, Charles Darwin has attained a near-mythic stature in the Western intellectual tradition. He is often cited as one of the founding fathers of contemporary naturalism—the view that all events in the universe have a natural (i.e. scientifically analyzable) explanation—which has largely unseated previously predominant religious explanations for life and its origins.

This intellectual upheaval was by no means restricted to the natural sciences. The theory of evolution has influenced the social sciences, the humanities, and the arts since its inception. 150 Years of Evolution: Darwin’s Impact on Contemporary Thought & Culture, a published anthology of papers delivered at a San Diego State conference discussing that topic, highlights these influences.

What did Charles Darwin do to impact such topics as the debate over free will, human uniqueness in the animal kingdom, the classification of human religions, and feminist thought? Scholars of diverse disciplines assemble to examine this question, interrogating the way evolution and natural selection have shaped the past hundred and fifty years of thought in their respective fields. The anthology features writing by Curtin Johnson, Sandra Wawytko, Mary Traschel, and many others. For those familiar with Philip Appleman’s Darwin, and The Literary and Cultural Reception of Charles Darwin in Europe edited by Glick & Schafer, this collection offers further critical insight into Darwin’s continuing interdisciplinary relevance.

Dr. Mark Wheeler, Professor of Philosophy at SDSU, skillfully compiles the collection of articles into a single volume. They read as a lively discussion on Darwin’s wide-reaching influence outside his original biological domain—an influence which, in many fields, is not uncontroversial. Those interested in the intersection of natural science and the humanist disciplines will find rich analysis in the pages of 150 Years of Evolution: fascinating to scholars of Charles Darwin’s natural selection, but accessible to those interested in a more general understanding of the theory.

The anthology is available in a glossy paperback edition, laid out with an elegant and readable typeface, and is conveniently available through Amazon books.


Lorenzo is a CU Boulder MA graduate, professional content writer, and educator focusing on the intersection between the sciences and the humanities.
Posted by Lorenzo Nericcio at 2:22 PM

Email ThisBlogThis!Share to TwitterShare to FacebookShare to Pinterest
Labels: 150 years of evolution