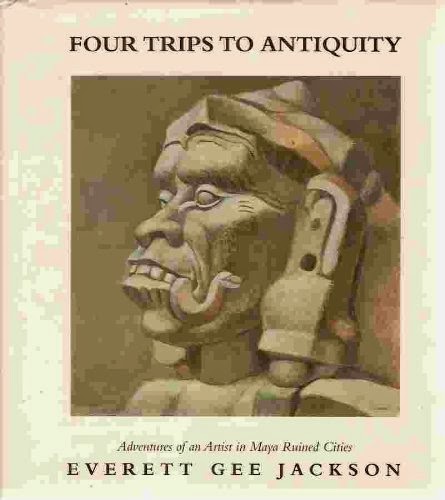 The absorption of an original culture slowly dwindling down and disappearing much like the Mayan's last remaining artifacts slowly crumble and fade away with time. By pollution, weather, tourists, or the passing by drunk each takes a toll on what is left of the artifacts. Remaining cultures are destroyed much in the same way from being absorbed, wiped out or becoming influenced by western influence. Eventually the only proof of their existence will be the words upon a textbook page.

Within Four Trips Jackson describes the heritage and peoples of the South American Indians and the problems they face, from explosions in the cities to how easily they are swayed based on empty promises from politicians. "Look at your feet. Why are you not wearing shoes? Other people wear shoes, but not you Indians...I looked down at my own feet. Neither was I wearing shoes I discarded them when I arrived in Copan and had put on guaraches instead, the kind of sandals worn by the Indians...making the Indians dissatisfied with their lot might assure him their favor and their vote" (64). Stores also begin to take advantage of the Indians by capitalizing off them who without care contribute to the pollution of the area, "But they left the plaza littered with empty Dr. Pepper bottles. Obviously the store which sold the drink knew in advance that the Dr. Pepper-drinking Indians were coming"(64). This results in further destruction of cultural identity

"[It] was a great misfortune one moonlit night when a drunk came walking along here he suddenly had a violent impulse. To relieve his anger he hurled a big rock, or perhaps an empty bottle, into the figures face...It had withstood many storms for over thirteen hundred years, and then a worthless drunk had to disfigure its face" (165). Much like the drunk, it does not take much to destroy a civilization that survived for so long on its own. Whether its disease, xenophobia, or war once civilizations are wiped out they cannot be brought back much like these statues. 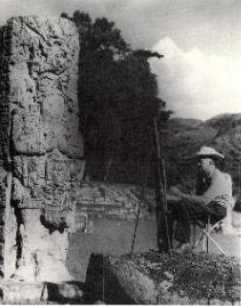 A Current example of this is the indigenous people of Hokkaido, Northern Japan. The Ainu people were seen as a pest after mainland Japan acquired Hokkaido around the early 1800's. They were introduced to new diseases and used in forced manual labor where many died. They were never seen as Japanese nor have they been even now. In 1984 the Ainu census was shown that there were 24,381 left in Hokkaido, which is slowly growing after their numbers fell as low as 15,969 in 1931. If they had not fought back so hard, it would have been the last of them just as it has been for many tribes and indigenous people.

If effort is not made to conserve our ancient cultures, they will be nothing more than crumbling stone, and words they grace the pages of forgotten textbooks. We can only hope that the pieces will live on in his artwork his own form of conservation.

Take a trip to antiquity by purchasing the book here.

Also take a look at Jackson's other book Goat Tails and Doodlebugs, blogged about here.